The new facility, which is housed on the University of Birmingham’s campus, is the UK’s first dedicated research facility for energy storage using cryogenic liquids, comprising new laboratories, equipment, and a major demonstration plant.

Liquid air could revolutionise the way energy is stored, reducing the costs of integrating intermittent generation into the electricity system and ensuring power is available when it is most needed. 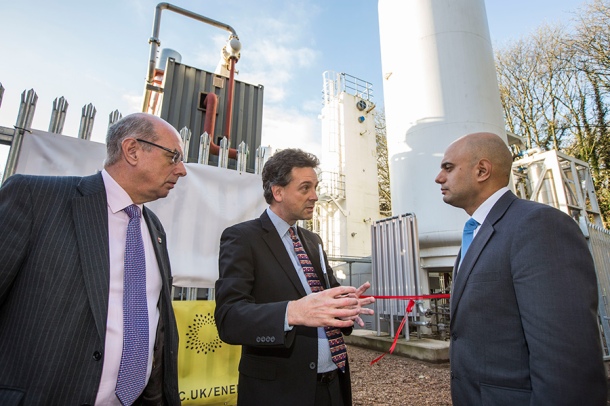 Cryogenic energy storage systems use renewables and/or off-peak electricity to liquefy air which involves compression and expansion processes. The cryogenic liquid has a temperature below -190oC and is stored in a vessel. It is pumped to a high pressure (150 bar) when electricity is needed. It is then vapourised into a gas, and then superheated using either or both heat and waste heat if available, before going through an expansion process in a turbine to generate electricity.

This system generates electricity when it is most needed: taking renewable and off-peak electricity and using it at peak times to solve the ‘wrong-time wrong-place’ energy generation and supply problem.

The cryogenic energy storage plant is also connected to the University’s electrical grid, providing a small amount of power to the campus.

Business Secretary Sajid Javid said: “A Government investment of £5.9 million in these cutting edge facilities at the University of Birmingham will help scientists make their research a commercial success. The project has the potential to transform energy storage by using innovative technology that could create a new industry worth at least £1 billion to the UK economy.”

‘Cryogenic energy storage could be a significant component of the future energy mix, providing as it does the ability to store wrong time energy and deploy it at times of greatest demand. The Birmingham Energy Institute and Thermal Energy Research Accelerator are extremely pleased to work in close partnership with companies such as Highview to try and shape the energy solutions of tomorrow.’

The Energy Research Accelerator (ERA) will tackle some of the biggest energy challenges facing the UK by transforming research and development in three critical areas: thermal, integrated systems and geo-energy. The core objectives of ERA are to make better use of primary resources, bring about smarter energy systems, reduce our dependence on importing energy, enhance energy security and resilience, and help achieve the UK’s carbon reduction targets. The Thermal Energy Research Accelerator, T-ERA, is about delivering the science and technology of thermal energy via products and services to market. This involves the development of cold and hot thermal energy technology and is based on the close working relationship between University and industry.